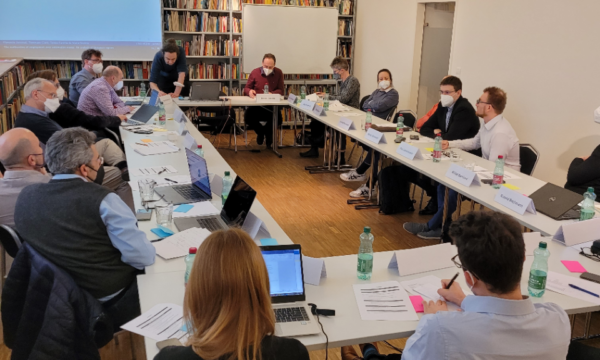 During the event, held on 25 March in Vienna, the participants discussed eight papers that delved into how these three megatrends are changing labour markets in the EU.

The majority of the presentations addressed the impacts of technology (robots, intangible capital, ICT investment) on various dimensions of inequality: makeup of the labour force; labour market transitions by age, gender and skill; and gender pay gaps. Additionally, the impact of ageing on job polarisation and capital formation was addressed.

The papers show that findings from the European economy are more diverse than from the US. We seem to need a great deal more research into intervening variables such as labour market institutions, production regimes and regional specialisation if we are to explain these differences.

The lesson from the presentations is that indicators of exposure to technology, although nice and simple (especially IFR data on “robots”), only address a very specific use of technology. For now, they do not appear to be good at capturing networked or systemic effects of connected ICT or ICOT (information, communications, and operations technology). Other indicators such as ICT capital, although broader, also fail to cover all aspects of “digitalisation”. For the remainder of the labour market, adverse effects of technology exposure were found on gender pay gaps; employment shares of older workers, especially older women; and sometimes on the middle skill and income groups. Relations between types of technology investment also vary on the regional level.

The very unevenness of the findings, and in some cases the absence of significant relationships, may suggest that exposure to “robots” or investments into digital technology are actually embedded with all kinds of other, less circumscribed labour market dynamics and changes, as comparative technology and workplace studies do indeed suggest.

This unevenness also makes it difficult to draw conclusions and formulate policy advice. Still, participants made a valiant effort. So far, investment into training and retraining is still a good idea. It seems that such investments should be aimed not just at manual workers performing routine tasks, as in the past, but also at middle-income workers. Older workers in particular may need training. However, if labour market polarisation continues it will also be crucial to address such issues as in-work poverty and minimum incomes. Actions will be needed to create secure environments for workers to reskill.

One of the papers found that on the company level, adjusted gender pay gaps widen in the presence of performance-related pay, robots and a lower share of women employees. While adoption of robots boosted wages, men benefited more than women. Hence, neither technology nor incentive-based pay schemes appear to render payments more equal between the genders. However, if performance-based pay schemes accompany investments into a company’s economic competences, this narrows the gender pay gap, which may indicate the value of collective bargaining.

Looking at task groups, age groups and countries, the findings show that robots don’t directly replace workers. It seems that the effects of robot exposure vary with labour costs in each country, having the strongest stabilising effect on employment in countries with lower labour costs such as CEE economies. Again, it is not necessarily workers who perform predictable repetitive tasks, for instance those on production lines, who are at risk of losing their jobs, so (re-)training efforts should not necessarily focus on them. Rather, middle income groups face some effect – and as robot technology becomes cheaper and more widespread, stronger effects on this group may simply be delayed. The share of tech manufacturing in each country may also play a role. Finally “automation risk,” appears to contribute to income inequality in many countries, although the effect varies.