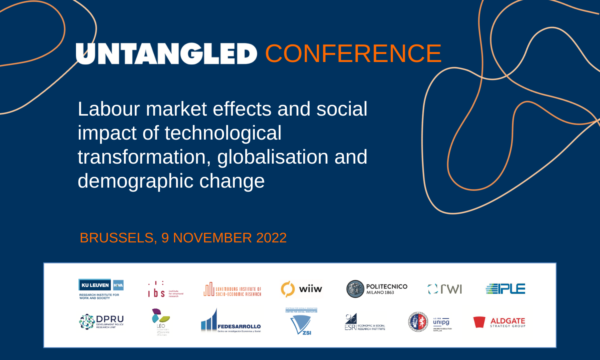 The UNTANGLED Midterm Conference, titled “Labour market effects and social impact of technological transformation, globalisation and demographic change”, was held on 9 November in Brussels, attracting 16 papers and 45 participants. We had four very productive sessions and a lively panel discussion.

“The conference provided an excellent opportunity both to showcase the work of UNTANGLED researchers and to hear from others in the fields we’re looking at,” says Mikkel Barslund, who coordinates the UNTANGLED research consortium. “We managed to attract a number of high-quality papers with findings that will certainly inspire new avenues of research, and I’d like to thank everyone who contributed to the success of this event.”

The conference started with a keynote from Anna Salomons, Professor of Employment and Inequality at Utrecht University, who talked about newly emerging job categories (“new work”). She shared the findings of her research showing that new work emerges in response both to technological innovations that complement the outputs of occupations, and to demand shocks that raise occupational demand. Conversely, innovations that automate existing job tasks do not yield new work, while adverse occupational demand shifts slow the rate of new work emergence.

The morning part of the conference was split into two thematic sessions, each of which had four papers. The Technological Change and Employment session, chaired by UNTANGLED researcher Robert Stehrer (Vienna Institute for International Economic Studies – wiiw), started with a presentation by Fabien Petit (Science Policy Research Unit at the University of Sussex), who discussed his paper titled “Heterogeneous Adjustments of Labor Markets to Automation Technologies”, written jointly with Tommaso Ciarli and Florencia Jaccoud. The paper, an outcome of the Pillars research project, provides evidence on the relationship between investment in automation and employment in European regions, and shows the extent to which this varies over time across clusters of regions, industries, and technologies.

Myrielle Gonschor (Leibniz Institute for Economic Research-RWI) presented a paper titled “The Impact of Robots on Labour Market Transitions in Europe”, written jointly with Ronald Bachmann, Piotr Lewandowski and Karol Madoń within the framework of UNTANGLED. Their findings provide evidence that the rise in automation of European economies has a small positive impact on employment.

Next, Antonio Martins Neto (UNU-MERIT) talked about his, Xavier Cirera’s and Alex Coad’s research on Brazil’s labour market. Neto discussed a paper titled: “Routine-biased technological change and employee outcomes after mass layoffs: evidence from Brazil” which shows that job displacement has a negative and lasting impact. Workers in routine-intensive occupations suffer a more significant decline in wages, and more extended periods of unemployment, than those in non-routine occupations.

The last presentation in the Technological Change and Employment session was given by Piotr Lewandowski (Institute for Structural Research – IBS). He talked about UNTANGLED research conducted jointly with Karina Doorley, Jan Gromadzki, Dora Tuda and Philippe Van Kerm on the impact of automation on income inequality in Europe. Their preliminary results show that even though automation impacted employment rates and wages in most European countries, its effect on household income inequality was very small.

Meanwhile, the parallel morning session was devoted to skills and education and was chaired by UNTANGLED researcher Ilse Tobback (HIVA-KU Leuven). The first speaker, Femke Cnossen (University of Groningen) presented a paper titled: “Learning the Right Skill: The Returns to Social, Technical and Basic Skills for Middle-Educated Graduates”, written jointly with Matloob Piracha and Guy Tchuente. This paper provides a new data set and uncovers the skills that middle-skilled students learn in school. Using this data, the authors show that skill returns vary across students specialized in STEM, economics and health, as well as across sectors.

Ludivine Martin (LISER) presented a paper titled “Boom of Digital Skills: Recent Labour Market Dynamics in Western European Countries”, written jointly with Kamil Filipek. The authors’ preliminary results show that the existing classification of digital skills does not follow the dynamics of these skills in the labour market and that purely technical skills are not in the highest demand. Moreover, the Covid pandemic lowered the demand for some domains of digital skills.

Lucas van der Velde (FAME|GRAPE) presented a paper titled: “Digitalisation, Changing Demand for Skills and the Gender Inequality in Earnings”, written with Wojciech Hardy and Anna Matysiak. The authors find that women are overrepresented in lower-paid care and teaching tasks rather than in better-paid management or teamwork tasks. Furthermore, women are least present in occupations that are rich in analytical tasks and which pay best.

Florian Röser (University of Konstanz) discussed a paper titled: “Automation and Inequality – The Role of Educational Spending”, written with Daniele Angelini and Stefan Niemann, which analyses the trade-off between higher production growth and lower inequality, and the role of education policies in overcoming this trade-off. Their findings suggest that one-dimensional policies are ineffective in achieving this goal.

Before the afternoon sessions started, we hosted a panel discussion on policy, moderated by UNTANGLED project leader Mikkel Barslund, with three speakers: Mario Mariniello (DG EMPL’s Future of Work unit, College of Europe), Eric Thode (Bertelsmann Stiftung), and Thomas Ekman Jorgensen (European University Association). A lively discussion covered several topics ranging from the impact of AI on the quality of work, an ageing workforce and whether we know how to do retraining and reskilling to thoughts about new ways to view the current model of work and what kind of labour market we want for the future.

The afternoon session devoted to technology, growth, and value chains was chaired by Ludivine Martine (LISER). Robert Stehrer (Vienna Institute for International Economic Studies – wiiw) presented his paper titled: “The impact of ICT and intangible capital accumulation on labour demand growth and functional income shares”, which shows that there is no strong negative impact of ICT capital accumulation on labour demand growth. Stehrer also discussed another UNTANGLED paper, which he wrote with Maryna Tverdostup, “Demography, Capital Accumulation, and Growth”. They show that the ageing population is hampering growth in Europe, and that despite the growing share of older workers, adoption of automation is not accelerating.

Giulio Vannelli (Université Paris Dauphine – PSL) talked about a paper titled: “Global Value Chains, functional specialization and technology adoption”, written together with Lionel Fontagné, Ariell Reshef, and Gianluca Santoni. The authors find that increases in forward GVC participation reduce labour shares and result in a shift in functional specialisation away from fabrication towards other business functions: management, marketing and R&D. ICT adoption increases labour intensity through complementarity with labour, in particular in fabrication and marketing functions.

Next, Vahagn Jerbashian (Universitat de Barcelona) presented a paper titled “The Impact of ICT on Working From Home: Evidence From EU Countries”, written jointly with Montserrat Vilalta-Bufí. They found that working from home increased significantly almost everywhere in Europe between 2008 and 2017. The rise of this mode of work is strongly and positively associated with the fall in ICT prices.

Claudio Costanzo (ECARES) discussed his paper “Robots, Wages, and Time Allocation within Households”, which shows that automation is structurally changing labour markets and in the short run reduces average wages and the average gender gap.

To close the session, Camilla Lenzi (Politecnico Di Milano) presented a paper titled: “The Digital Service Economy as a Source of Intra-regional Wage Inequalities”, written jointly with Roberta Capello and Elisa Panzera. Their findings partly confirm the upsurge in wage inequalities but also nuance, if not mitigate some of the most pessimistic forecasts regarding the consequences of the diffusion of the new technologies on the labour market.