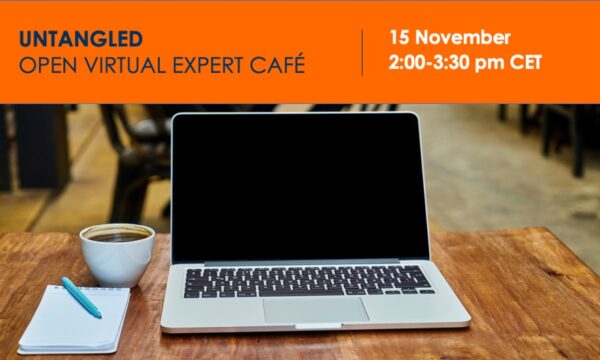 The fifth edition of the UNTANGLED Open Virtual Expert Café brought together 10 participants who discussed labour-market issues, presented their work and shared information about new projects and initiatives.

Ursula Holtgrewe of ZSI announced WeLaR, a new interdisciplinary research project examining the impact of digitalisation, globalisation, climate change and demographic shifts on labour markets and welfare states in Europe. The project aims to improve the understanding of the individual and combined effects of these trends on the market for labour and thus on welfare programmes, and to develop policy proposals fostering economic growth that is distributed fairly across society and generates opportunities for all.

Eduard Suari-Andreau of Leiden University talked about his recent research with Olaf van Vliet on worker mobility in the EU and public transfers. Using detailed administrative data, researchers calculated the benefits and allowances received by intra-EU migrants and compared them to those obtained by native Dutch citizens. The results show that while EU migrants receive less frequent and lower assistance, the differences narrow over time and fade after about seven years. The study also shows that differences in benefits and allowances received between migrants and Dutch citizens vary between schemes. For instance, migrants from Central and Eastern European countries are more likely to receive welfare benefits, while Dutch people are more likely to receive a state pension (AOW).

Roman Romisch of the Vienna Institute for International Economic Studies – wiiw – discussed the results of his research on the impact of globalisation on regional growth disparities. He provided evidence that in Europe, structural changes triggered by globalisation did not increase the divide between urban and rural regions. On the contrary, between 2000 and 2019 differences in regions’ GDP became smaller. Romisch argues that developing a sector (e.g. tourism) helps laggard areas to catch up. Hence EU Cohesion Policy and national industrial policies can help overcome the forces of agglomeration and create new sectors in rural areas.

Lisa Cheree-Martin of the DPRU at the University of Cape Town presented the preliminary results of an UNTANGLED case study on the impact of technological changes and work innovation on the insurance sector in South Africa. The study finds that technological changes can broaden the client base as insurance products become cheaper and more accessible for poorer people. However, automation of tasks will lead to job losses. Because skill gaps are already present in the industry, sector leaders are aware that investment in upskilling and reskilling of the workforce is inevitable.

The collected slides are available here.