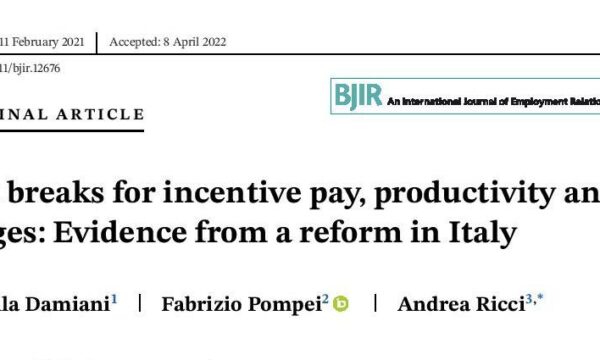 An article co-authored by UNTANGLED researcher Fabrizio Pompei of the University of Perugia has been published by The British Journal of Industrial Relations.

“Tax breaks for incentive pay, productivity and wages: Evidence from a reform in Italy” analyses the impact of a tax break on incentive pay (introduced in Law n. 208/2015) on labour productivity and average wages in Italian firms. Pompei and co-authors Mirella Damiani and Andrea Ricci use a unique source of firm-level information, drawn from a large representative survey of Italian firms merged with the ORBIS archive. By applying difference-in-differences methods, they find that:

These results take into account unobserved heterogeneity and endogeneity issues.